UAC Annual Conventions and Management Conferences
Served as the key point person with oversight for UAC’s two largest events each year. To date, I have organized 30 of these events,  each one involving approximately 300 attendees representing eight affiliate organizations, dozens of presenters and topics, 30-60 exhibitors and sponsors, three-days of programming, and dozens of third-party service providers all held in nine different venues across the state of Utah. I coordinated agendas, designed all marketing materials, organized online communications and registrations, handled lodging blocks of rooms and individual VIP arrangements, negotiated fees and contracts for speakers, facilities, lodging, and other things, and a hundreds of other details for each event.

Property Tax Administration in Utah
Worked with the Utah State Tax Commission, Property Tax Division, for about 12 years to represent UAC and co-sponsor more than two dozen workshops for county, city, school district, and special service district officials that educated them on how the entire Utah property tax system works. My role was chiefly to promote awareness of the events, make logistical arrangements, and provide on-site support to create an excellent environment for presenters and attendees. 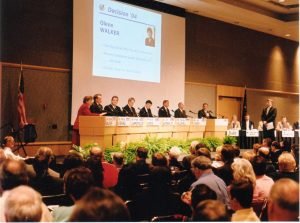 2004 Gubernatorial Forum
This was a forum I organized for the eight main candidates for the republication nomination for Governor. It was co-moderated by reporters KSL, ABC4, Salt Lake Tribune, Deseret News, and Standard-Examiner. Each reporter was given the opportunity to ask several questions of individual candidates. Even though it was part of our April Management Conference, we invited the general public to attend that segment and were pleased to have more than thousand in attendance (standing room only). We had anticipated Gary Herbert being a ninth candidate, however, the day before the Forum Jon Huntsman announced Gary was joining his campaign as running mate, creating a number of logistical issues that we had to respond to quickly. Click below to hear a radio spot advertising it on KSL that I wrote the script for: